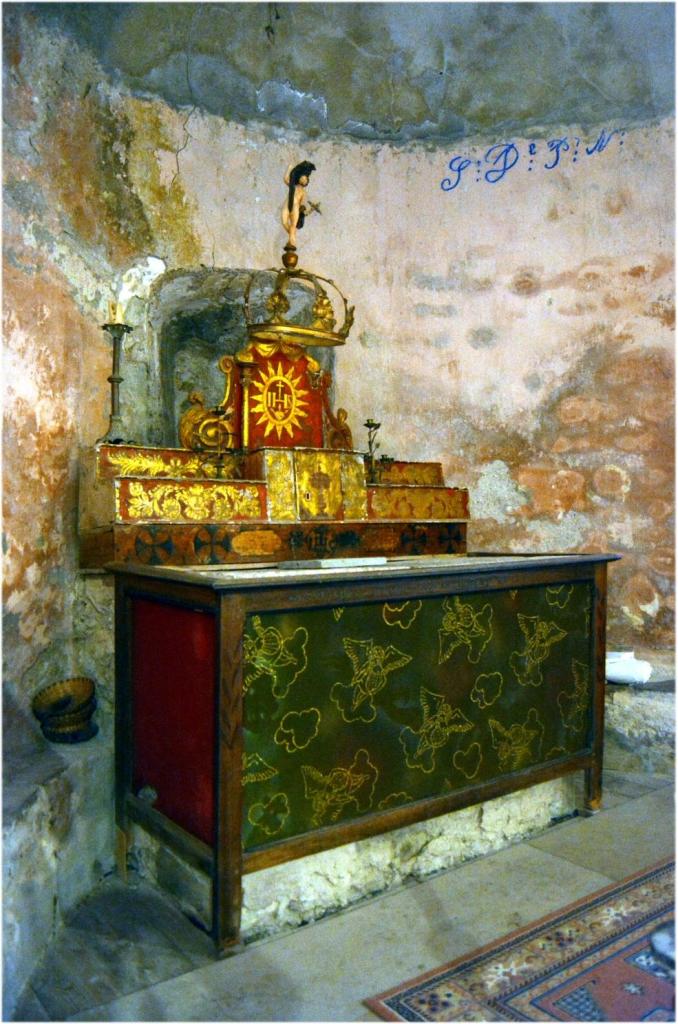 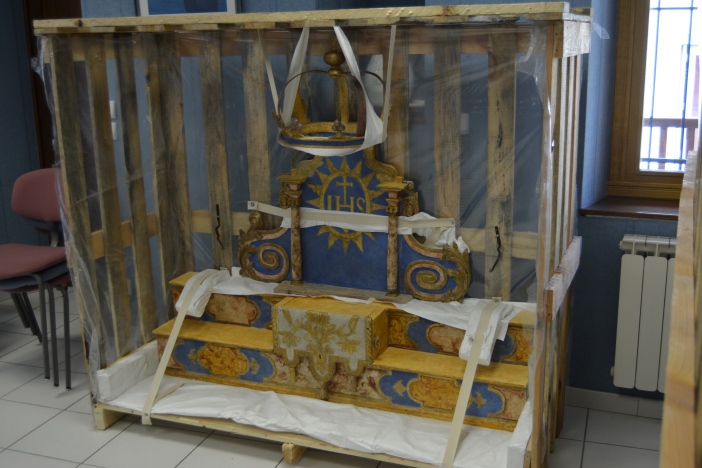 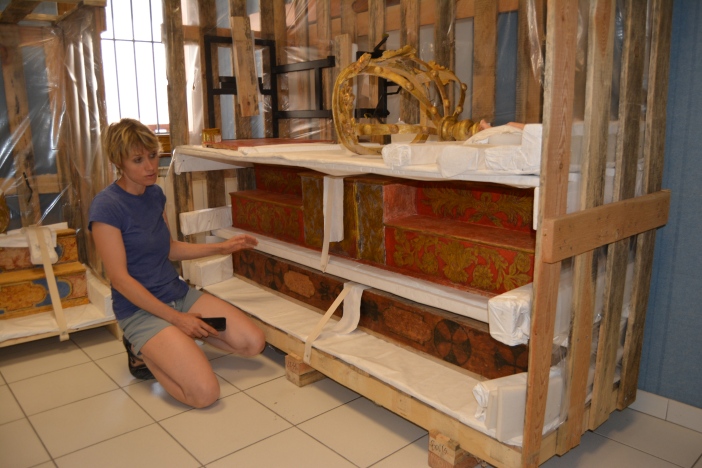 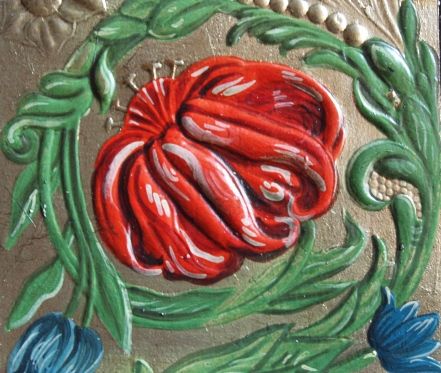 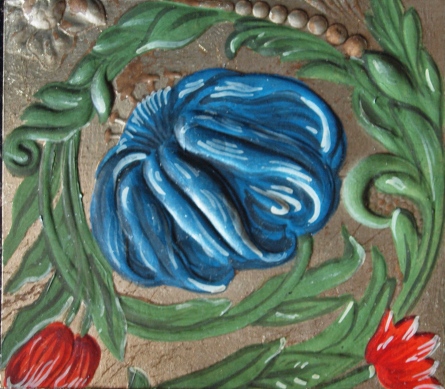 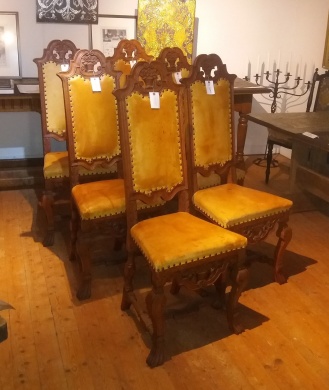 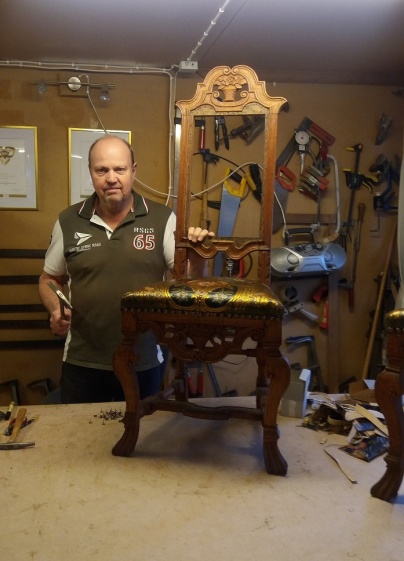 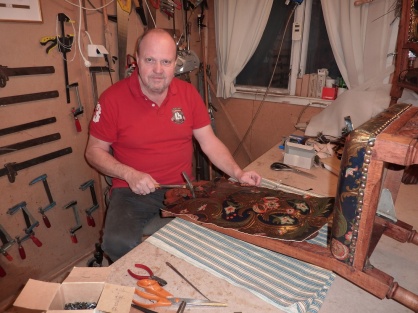 He came to the workshop with the idea to search the drawers for some forgotten leather panel he could use as a covering for Saint Fris’s  new reliquary.

He came, He saw, He went (with a panel under the arm)

Jacques, here lecturing on marbles, one of his great passions, he is at the origin of the Marble Museum in Bagnères-de-bigorre which is soon to open doors 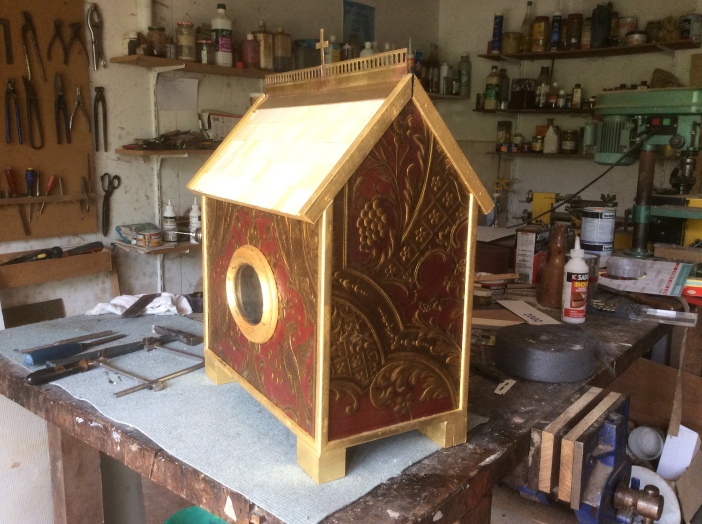 Ivory roof tiles comes from ancient piano touches, the woodwork form bits and pieces made and found in his workshop and a gilt leather panel from my drawer. All the work and intelligence by: Jacques !!

This reliquary reflects the spirit of the remote area I live in, small budget, great creativity, good will….. I love it.

Some pictures in situ at the Basilique St Fris will follow in a later posting.

Regularly we are asked to supply Gilt leather for alter pieces (Antependium).

As here in the St Peter church of Vic Fezensac.

The four sides of the alter are covered with leather. 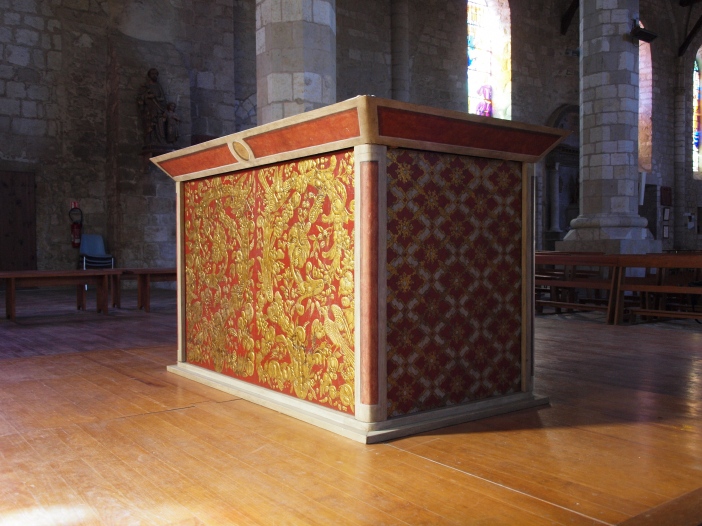 The back being covered with Abondance

The sides are covered with our Lauderdale.

This is a small alter which allows easy picking-up and re-positioning. 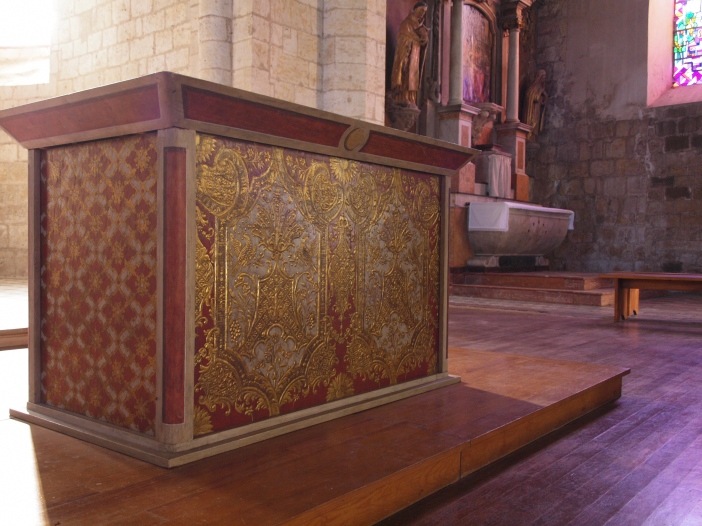 Hope you enjoyed this

Finaly, here some pictures of the Antependium of the church of Mont

Verentuil Antependium they have chosen “blend in colours”

Mont is located in the French department of the Hautes Pyrenées

Way in the mountains close to the Spanish Border 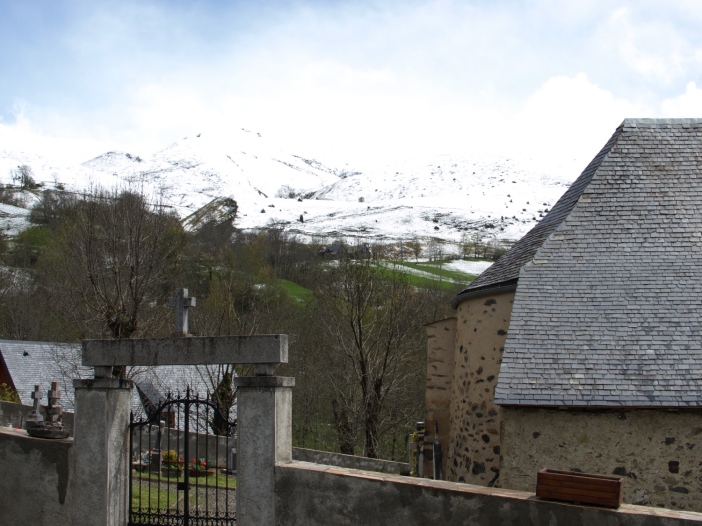 The interior of the church is just restored, it took a team of three painters  two years

to restore the wall paintings.

The Church of st Bartolomeo was build in the 12 century and  embellished as time passed by. 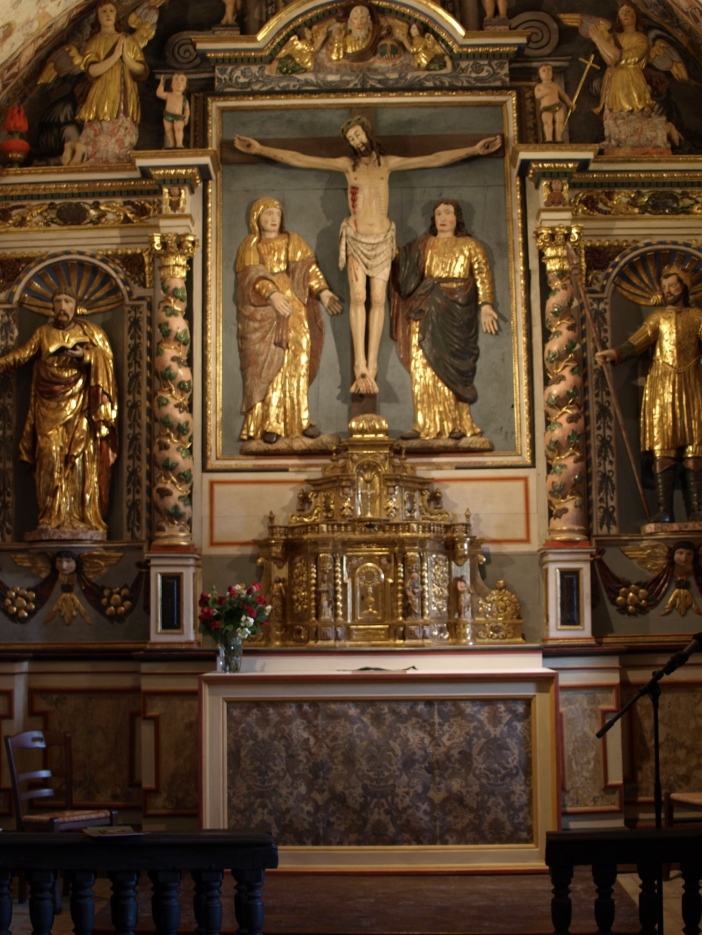 amazingly enough the old altarpiece, which was a painted fresco type altarpiece was conserved behind the “new” sculpted altarpiece.

Yet, amidst this little community they build this treasure. 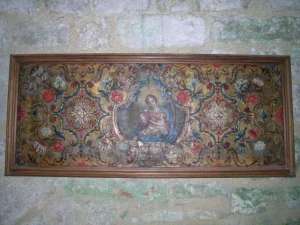 In the tranquility of a humble chapel or in the greatest cathedrals where one is overwhelmed by the proportions and majesty of the architecture. Where one feels elevated by the dazeling light  of the century old stained glass windows, once mass starts, all are focused to what is happening arround  the Altar.

The Altar is a representation of the Jesus Christ therefor great attention is given to the Alter in the liturgy of the Church of Rome ;

Since the 17th century alterpieces of giltleather were quite frequent certainly in the southern part of Europe .

In the earlie 18th century there was gilt leather workshop specialised in Antependia near the town of Ex-en-Provence, form the catalogue one could order a giltleather Antependium  of various designs with or without a central medaillon representing the Church protector or theVirgin Maria or one of the Apostels

My knowledge on the theoreical side of the subject  is limited therefor I did some research on the subject and found (and copied)  from http://www.newliturgicalmovement.org/2013/01/the-history-development-and-symbolism.html

An interesting reference to the doctrinal significance of clothing the altar is given by Amalarius [of Metz] (d. 859). “The Altar signifies Christ, as Bede narrates. The robes (vestimenta) of the Altar are the Saints of Christ.”

The purpose of a frontal is threefold.
1) a frontal helps to make the altar stand out from its surroundings. It has always been the mind of the Church that, in a mystical sense, the altar is Christ, and that, like the priest who celebrates Mass, it should be clothed in precious vestments on account of its dignity… the frontal is one of the most ancient of all the furniture of the altar.

2) It is a covering of honour for the body of the altar which, as we have already seen from the liturgical books, represents Christ Himself; and if further proof is necessary, it is provided by the five crosses incised upon the upper surface of the altar, representing the five wounds in Our Lord’s Body on the cross. Van der Stappen, Sacra Liturgia, ed. 2, vol. iii, Q. 42, i., says, “For the altar is Christ, therefore, on account of its dignity, it is clothed in precious vestments, as the Pontifical says in the ordination of sub-deacons.” Moreover, on Maundy Thursday this frontal and the cloths are stripped off during the recitation of the psalm, Deus, Deus meus, in which the verse foretelling the parting of Our Lord’s garments occurs…

3)The frontal is a means of employing colour to bring out the full meaning of the very beautiful symbolism in that same office of ordination of subdeacons which speaks of “the faithful with whom the Lord is clothed as with costly garments.” The red frontal, for instance, reveals the victory of the Rex Martyrum, realized afresh in yet another of His members…

Our Lord, as represented by His consecrated altar, puts on robes of majesty to identify Himself with those in whom His victory has borne fruit; His own purity reproduced again in the white robe of the virgin saint; His own heroic fortitude in the red robe of the martyr: and thereby additional emphasis is given to His invitation to be approach through the intercession of the saint with whose colour the altar is robed. And when the Robes of Majesty are all removed on Holy Thursday, more is indicated than the removal of His garments. His faithful, His costly garments, His disciples, are all stripped from Him; and His desolation is made the more evident by this complete annihilation of colour. But in addition to emphasizing the union of the Head with the saint commemorated by the feast of the day, the coloured frontal also serves to bring into clear prominence the union of the Head with His ministers of the altar, who are vested in the same colour…

The frontal — the altar’s clothing — has a deep, symbolical value. As the early linen clothing of the altar recalled our Lord’s burial shroud, so the precious coloured fabric of the later frontal is to recall his royalty. At the ordination of a subdeacon, the bishop in his charge to the candidate says “the cloths and corporals of the altar [which represents Christ] are the members of Christ, Gods faithful people, with whom, as with costly garments, the Lord is clad, according to the Psalmist: ‘The Lord reigns as king, robed in majesty’.” The clothed altar with its beauty and changing colours is a symbol of the Mystical Body — the whole Christ, Christ united with all his saints — it translates this doctrine into the language of colour and form. In addition to its symbolical value, the frontal — with its sequence of colours and its changing form and decoration — lends variety and new beauty to the altar, and helps to mark the degrees of festivity in the Church’s liturgy.

Another interesting reference to the doctrinal significance of clothing the altar is given by Amalarius [of Metz] (d. 859). “The Altar signifies Christ, as Bede narrates. The robes (vestimenta) of the Altar are the Saints of Christ.”

…a frontal helps to make the altar stand out from its surroundings. It has always been the mind of the Church that, in a mystical sense, the altar is Christ, and that, like the priest who celebrates Mass, it should be clothed in precious vestments on account of its dignity… the frontal is one of the most ancient of all the furniture of the altar.

These are pictures  from the Antependium we’ve made for the Chrurch of Mingot France , Hautes Pyenées 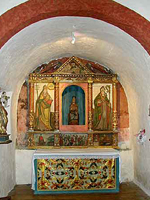 This is the Antependium of the church of Germ

We were involved in some other Antependia, I’ll promise to travel and take some decent pictures.