This perfect world.
A place of peace and harmony.
Nature is glorious, unharmed.
Storms are roaring yet only to be impressively beautiful.
A world apart from evil and sickness
Serenity amongst men
Serenity in nature

This world, so remote form the one we are living in is a widespread ideal found in many cultures and religions throughout the ages.

The Japanese created a mobile, temporary, in the here and now space “Utopia” by surrounding a confined space in a room, in a house or outside the house with gilded screens.
Within this confined area reigns harmony.

Japanese Prof Mrs Ido Misato wrote an article on the subject http://utcp.c.u-tokyo.ac.jp/publications/pdf/UTOPIA072.pdf
Her work is definitely worth reading and far more complete than the two, out of context sections I’ve selected here, I should have posted more of her work but any cutting I make is unjust to her effort and deteriorates the pictures she draws of these “magical screens”

“Poetry meeting spaces and teahouses were often considered “Muen” spaces. By cutting
the connection from outside social order, Muen space embodies a
place where there is no hierarchical order. Since it is totally an equal
space and social orders are ignored in principle, people from any
kinds of classes and gender can stay in a tea house or poetry meeting
place, and warriors must not bring their swords. Although this concept
is not directly relevant to the occidental concept of utopia,
Japanese medieval society had this kind of utopian space, which
negates reality. This is the space of nothingness (mu), cutting the connection
with mundane life.”

“It is quite likely that the people who used this extraordinary gilded
space were men of power who could afford gold. It is necessary to
keep in mind that to decorate space with gold was closely related to
the ostentation of the power. One could perhaps say that although
the gilded folding screen created a space that suspended hierarchical
distinctions, in practice it was a site where men of wealth mobilized
the monetary and symbolic functions of gold to further specific political
ends.”

Interesting enough, in 2004 the NY Times published an article by M. Holland Cotter on an exhibition ”Golden Fantasies: Japanese Screens From New York Collections,”
http://www.nytimes.com/2004/01/16/arts/art-review-painted-screens-from-japan-delicate-but-full-of-meaning.html
The writer M. Holland Cotter defends a less idyllic line, he imparts greater importance to human pride and vanity which are indeed strong drives. His approach is different yet one must consider that the exhibition he visits is not exclusively dedicated to the Gilded Screens as is the text by Prof Misato
This to say that both articles are must read.

Taken from the article by M. H. Cotter
“” As anyone familiar with art fairs or auction houses knows, art is a potent social tool. Almost magically, ownership bestows status, turns nobodies into somebodies and makes those somebodies look classy and smart or, at the very least, rich. Yes, art is about ideals and beauty and all that. But it is also about the power of possession, the sovereignty of taste. Deep down, it appeals to the royalist in us all.
This is one way to talk about ”Golden Fantasies: Japanese Screens From New York Collections,” a small but splendiferous show at the Asia Society and Museum consisting of eight painted and gilded folding screens and a few related objects.
Painted screens have a long history in Japan, now hard to trace. Made of paper or silk attached to wood, they are fragile things, and although they were evidently produced in great numbers, relatively few have survived intact. Portable and flexible, they were a kind of instant architecture, ideal for dividing interior space into extemporaneous nooks and compartments and effective for warding off prying eyes and unwelcome breezes outdoors. (Byobu, the generic name for such screens, means ”wind protection.”)
And with their taut surfaces, they were natural and versatile vehicles for painting. Screens intended for formal or official settings might use images to project moral or political messages, while others designed for domestic quarters might carry scenes of leisurely pursuits and sensual pleasure. Large screens or pairs of screens could accommodate panoramic landscapes and narratives, as is the case in the Asia Society show, organized by Rosina Buckland, a doctoral student at the Institute of Fine Arts, New York University.
The screens on view, all but one on loan from private collections, date from the 16th and 17th centuries, when a feudal Japan was undergoing jolting change. By that time imperial rule, centered in Kyoto, had long been supervised, if not entirely usurped, by shoguns, members of an ambitious military elite who acquired the cultural credibility required of leadership by patronizing and collecting art.
They did so at a time when aesthetic trends changed often and fast. Chinese styles were the measure of painterly refinement during the Muromachi era (1333-1573). But in the brief Momoyama period (1573-1615), lavishly baroque and astringently minimalist strains of art developed side by side.
Opulence, in the form of gilded and painted screens, proved particularly effective for decorating interiors of fortified shogunal castles, with their thick walls, small windows and ponderous eaves. Such screens amplified sunlight in the day and candlelight at night. They also reflected the wealth of their patrons: gold was not cheap. And they advertised the cultural aspirations of parvenu rulers intent on producing, in sometimes over-the-top ways, their own version of imperial spectacle. ”The very privies are decorated with gold and silver,” sniffed one 16th-century observer. ”All these precious things are used as if they were dirt.”
The end of the Momoyama brought further social developments. Urban culture flowered in the new capital city of Edo, present-day Tokyo. In that elbows-rubbing environment, rigid class hierarchies enforced by military rulers loosened up. Wealth, once generated by heredity or conquest, was increasingly concentrated in the hands of a bourgeois merchant class.
And just as rough-and-ready warlords had looked to the imperial court for a model of magnificence, the entrepreneurs of Edo took shogunate culture, with its strategy of acquiring refinement by accumulating art, as a guide. Through paintings — history paintings, nature paintings, genre paintings, commissioned or bought off the rack — middle-class strivers forged an upwardly mobile self-image. “”
The fourfold screen we show here will be exhibited during the “Salon du Patrimoine Culturel” in Paris in November. Measurements are 2800 cm W X 145 cm H // 110″wide X 58″high
We have printed the metallic foil on vegetal leather panels, the metallic ground thus obtained was afterwards varnished with a natural lacquer. The Pine Tree which symbolizes Purity is painted with artist oil colors. Knowing that 18th century gilt leather was often used in Japanese culture we thought it a good idea to revive this cultural interchange complete The Flemish technique and the Flemish artistic hand, here combined with refined Japanese design. 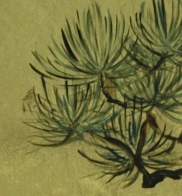